Cookbook Author / Founder & Managing Director of romi-unie Co.,Ltd.
Born in 1971. Romi Igarashi trained in French Pastry in Paris and Tokyo. Her career began at a French pastry shop and French cooking school. Then in 2002, Romi started her own career as cookbook author romi-unie.
She is passionate about spreading the joy of making sweets, and achieves this through media such as magazines, books, TV programs, and events.
She opened her first store Romi-Unie Confiture, specialising in jam, in Kamakura in 2004. In 2008, she also opened Maison romi-unie, a store specialising in baked confectionary and jam in Tokyo, Gakugeidaigaku.
She also runs sweets classes called Uni-Labo., at the in-store atelier of Maison romi-unie. 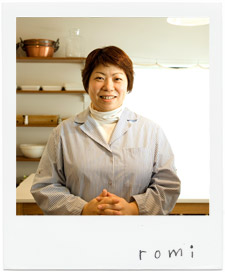